The Texas Longhorns: Can UT Win the BCS National Championship in 2011?

The Texas Longhorns: Can UT Win the BCS National Championship in 2011?
by Louie Longoria Contributor 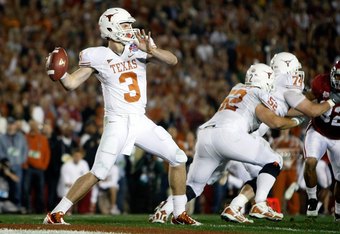 Texas was thrust into unfamiliar territory at the end of last season.

During the 2010 BCS National Championship Game against Alabama, the Longhorns had their leader, QB Colt McCoy, leave the biggest game of his career with a shoulder injury.

Although it was the final game of McCoy’s stellar collegiate career at the University of Texas, it left the Longhorns with a sudden hole at the QB position especially with a BCS national title on the line.

The freshman QB was thrust into the BCS National Championship Game after McCoy went down but after a rough, yet expected start, Gilbert came into his own and matured before our very eyes.

Gilbert threw two TDs and four interceptions in the Longhorns 37-21 defeat against Alabama that night.

The numbers do not appear to be eye-opening but considering the Crimson Tide finished the season in the top 10 in rushing, passing, scoring, and total defense, as well as the extremely high stakes of this game, Gilbert showed true upside.

He showed the country that the Texas Longhorns are not going anywhere.

With McCoy being drafted to the Cleveland Browns in this year’s NFL Draft, Gilbert leads a team which has five returning starters on offense as well as key contributors from last year’s national championship berth.

The Longhorn running game needs to improve as there is no standout starter in a crowded backfield.

Tre’ Newton, who was the starting RB for Texas last season, appears to retain his job for the time being, but struggles with injuries last season could come back to play a factor in the upcoming season.

Chris Whaley and Fozzy Whittaker will also be added to the RB rotation, so unless one of these stands out, Texas may have a running back by committee.

Retaining two of their three starting wideouts in James Kirkendoll and Malcolm Williams, as well as the solid play of John Chiles and Marquise Goodwin, should provide Gilbert with plenty of options to throw to.

On the defensive side of the ball, DE Sam Acho, one of seven returning starters, leads a solid group ready to continue the impact made last season in the Big 12. Acho, who led the team with 10 sacks last season, looks to continue the tradition of dominant Longhorn pass rushers like Brian Orakpo and Sergio Kindle.

The defense’s interior unit looks to build upon its dominance in which it was the top ranked rush defense in the nation, finishing second in sacks. This, combined with a stellar secondary unit that returns three of four starters, will help Texas continue to stay in closely-contested games.

With Big 12 rival Oklahoma retaining eight players on offense and six on defense from last season, they look to be the main competition for the Longhorns.

The Longhorns may be lacking the star power and athleticism shown in year’s past, but with a nice blend of youth and experience, there is no doubt Texas will be back in the hunt for a Big 12 Championship.

If they can accomplish that, they will definitely be considered to play in Glendale, Ariz., for the BCS National Championship in 2011.

Just How Good Will Garrett Gilbert Be in 2010?